My NRA Convention in Brief 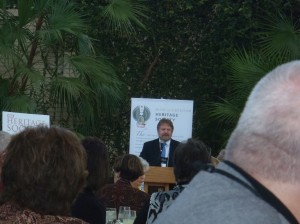 THURSDAY, APRIL 12th: Went to Forest Park and the museum there, then attended HERITAGE SOCIETY luncheon for those folks who have put NRA in their Wills or Trusts.  That night I went to the NRA-ILA auction… had fun but won nothing in the bucket auctions, and was out of my league for the big auctions… so now I had to figure out what to buy as I could not go home empty-handed.

FRIDAY, APRIL 13th:  Actually a very good day.  Had an all day firearms law seminar, met a large number of lawyers, had lunch and a chat with LTC Ollie North, and then back to room to watch Sherlock Holmes movie… which I slept through!  I guess I had an overdose of thinkin’ that dun me in.

SATURDAY, APRIL 14th: Got to look at GUN GEAR at NRA Show.  Wow, overload.  Said hello to Alan Gottlieb and my friends at Second Amendment Foundation, had a great chat with Marty Hayes, J.D., and my very own gun guru of common sense, Massad Ayoob, at the ACDLN booth during NRA Annual Convention.  Lots of folks stopping by both of these booths.  Massad is teaching for Seattle Firearms Academy in July, and there will apparently be some well-known shooters there too.  Got interviewed on camera for the folks running the NRA gold program where you can purchase coins, bullion, and the like.  Extremely interesting subject and these folks impressed me with their professional approach to this subject.  I am always impressed when somebody takes the time to explain options and do a service rather than just sell. 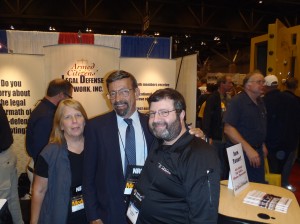 Then I went over to Silencerco, Advanced Armaments, and GemTech to talk to my buddies at each company that build silencers and cool stuff.  We caught up on ATF issues and compared what we were hearing.  Spoke to some gun owners about gun trusts and gun law.

Bought me a Benchmade Triage 916 knife from a local company… then met the President who talked to me for about an hour about building a gun owner community focused on gun law.  Met Rick and Ray Heizer who are making the new self-defense gun, and we talked for about 40 minutes too.

SUNDAY, APRIL 15th: Out to breakfast with my friend Don Singer at a local joint.  Pancakes, eggs, sausage, hash browns… diet to the winds!

Back to show for one last run-through and a meeting with Cold Steel VP… and off to airport and home.

What a great visit.  People in St. Louis were real friendly and nice, too.