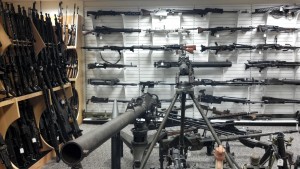 Just got back from a two-day trip to the NRA Headquarters concerning the GunDocx(TM) Trust System project I have been working on… On Monday I visited the NRA National Firearms Museum and even visited with some NRA staff to fill them in about the imminent release of GunDocx(TM) to attorneys wanting to deliver gun trusts all across the country!

Starting in January in Seattle, my team will be conducting two-day Continuing Legal Education Courses for GunDocx(TM) Attorneys in a number of cities, starting in Belleuve, WA on January 26 and 27.  Then we go to Scottsdale, AZ on February 20 and 21.  We will host other CLEs around the country, too.  More information is found on the Education tab at www.wealthcounsel.com.  There is far more going on and so stay tuned for more detailed announcements in coming days.

The next day, Tuesday, I drove about an hour and a half to visit some colleagues (hopefully new friends) at the National Firearms Branch (NFA Branch) headquarters in West Virginia.  The building itself is deceptive… it is one story and looks kind of small from the front… but actually has underground levels and is huge inside.  I met with NFA Branch Chief Ed Saavedra, Examinations Section Chief Ted Clutter, and our Washington Examiner Sandy Snook, among a number of agents, staff and others.  What a great bunch!  They made clear that they are there to help folks comply with law, and that customer service is what they are all about.

During my tour of the facility I saw various ATF divisions at work.  Most interesting to me was NFA Branch and the neatly organized boxes and boxes of applications for NFA firearms.  Their backlog is about 3,000 to 4,000 applications, and they have the same or fewer staff to handle an increasing number of applications… about 125,000 per year with only 9 Examiners.  That is why you have to wait for approval of your silencer purchase.

We discussed my plan to make GunDocx(TM) Trusts a new national standard, and everyone was helpful and encouraging in hopes that it will make applications flow more easily.  We discussed some fine points of trust drafting to meet BATFE needs, putting a wrapper on the discussions we have had in email and by telephone throughout the year.  I even got one gun trust approved while we were talking!

Ted introduced me to several Special Agents, and one was kind enough to take me through the ATF Reference Library… of GUNS!  It was a huge room of neatly stored firearms of EVERY shape, kind, caliber, from spy guns and pen guns to cannons.  Most of these were confiscated or seized; some are war booty from the Revolutionary War it seems to whatever space alien conflict our government is hiding from us.  I got my picture taken with a gold-plated fully functional Iraqi AK-47… that was owned by a famous dictator.  Unfortunately, they got it back before I made it out of the building… it WAS an accident!  I did not mean to put it in my Android Tablet case… did not fit very well anyway.  They were very nice and just shook their heads.

What can I say?  I’m a gun guy.  And everybody needs at least one in gold.  Black guns are so old school.